From Cute to Creepy Clown 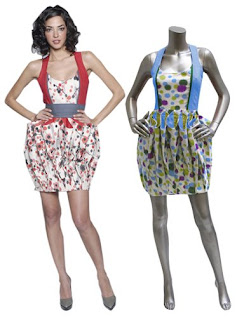 On the right is the mass-produced version of a winning design from The Fashion Show -- the knock-off of Project Runway that Bravo created after losing their lawsuit with Lifetime. I've always wondered how they tweak the winning designs to translate into something more accessible and wearable. While I understand some changes might be necessary for affordability and to fit the average woman (this style probably isn't the most wearable unless you're a 6 foot, size 2 model), I can't believe they couldn't do better than this!

As Tom and Lorenzo note, "They went from "chic little garden party dress" straight to 'Mrs. Clown.' They couldn't find ANY fabric closer to the original than THAT?"

Exactly. That fabric is soooo creepy-clown. And where's the belt that cinches in the waist and makes the unusual construction of the skirt less clown-like? If I were Anna McRaney, I wouldn't be too happy about this. Then again, she did win over a hundred grand, so she probably couldn't care less.
(Photo: Tom and Lorenzo)
Posted by donna at 8:56 AM