Mongolian Dreams (and an apology to all entomologists) 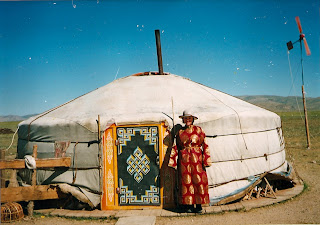 Ten years ago I took an amazing trip that started with a teaching gig in Russia, followed by two glorious weeks in St. Petersburg and a jaunt to Beijing where I discovered how easy it is to get by on $5 a day. My adventure ended with a tour through inner Mongolia and, finally, a long train ride through Siberia, over the Urals and back to Moscow. It was one of the most singularly memorable and fascinating trips I've ever taken. And it's a good thing it was so memorable because I had nothing but camera troubles the entire trip. I'm afraid that the above picture of me wearing a traditional del over my own clothes (not my idea, believe me) and standing in front of one of the many gers we were graciously invited to stay in is the only surviving photograph of my time in Mongolia. I met my travel buddy, a Swedish girl named Cecilia, in Ulan Bator. She and I shared the cost of our guide/driver, Migar. Migar cheerfully drove us around inner Mongolia, in a Russian van with no seat belts, while he played a cassette of Abba's greatest hits in Cecilia's honor. I have so many memories - eating marmot, riding camels, drinking Mongolian vodka - but one of my favorite memories was this amazing field of beetles Migar took us to see. It seemed that every square inch of grass was covered with rather large, gentle bugs. It was so lovely

In an effort to infuse some color into my drab 1970's kitchen, I tried to recreate the memory. The beetles were very large, though not quite as large as in the painting - (I hope that it's obvious that I wasn't going for scale or realism.) - and were actually black with white spots. I've never seen a bug like that since, and I probably never will again. So my representation isn't very accurate (I don't even know if they all have six legs!) but that's okay with me. In retrospect, I'm kind of grateful for my camera trauma because it helped me create much more colorful memories, which, in my book, is way more fun than reality.