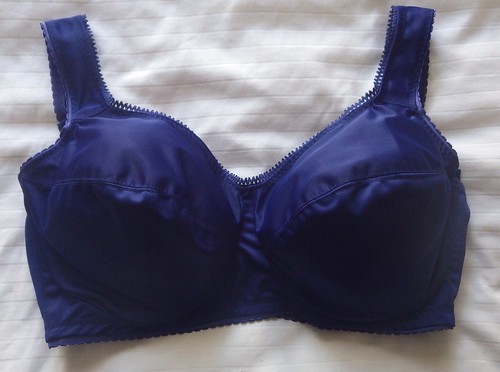 Okay, so bra-making's hard. The photo above is my second bra, and while there is an improvement in both the sewing and fitting I'm still not there. I'm not giving up, though, because I find the process interesting, and I believe that I will eventually get a good fit. Or at least I will have a better understanding of what I need when I shop RTW.

Also, photographing bras with large cup sizes is kinda hard, too. For the top photo I stuffed sweater tights inside the cups to give an idea of shape. Below is another photo in all its deflated glory. 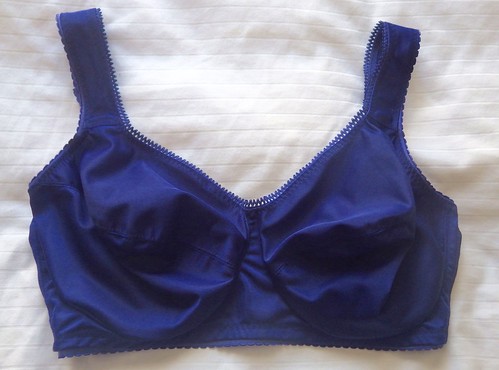 I have a confession to make: I'm in my forties and I have never had a well-fitting bra. In my teens I was too embarrassed - since I was often teased and described by friends and strangers alike (in a multitude of ways) as overdeveloped and generally made to feel freakish. BTW, what is it with people making body comments? How do people not know that it's rude? I find it so gratifying now when I see young women shutting down body snark and only wish that I had spoken up in such a way when I was their age instead of pretending to laugh while being quietly mortified.

So I guess this attitude towards my perceived body flaws carried over into my adult life. I would shop quickly to find something that somewhat fit, or order a bunch of different sizes online. But one of the nice things about getting older is that you eventually stop caring so much about what other people think. Now I want a bra that fits me really well - that's comfortable and supportive, but also pretty. And I want one in every color. It's time.

My second bra is another Pin-Up Girls Classic bra. The first one was too large in the upper cup and too tight in the band. So I went up to the next band size and down a cup size. The band feels better and I can fit two fingers, but it's still a little tight. (ETA: I forgot to add an important detail! I doubled up on the power net, so maybe that's why the band feels so tight!) The cup encases my entire breast, but there is no extra room whatsoever. I know that the fit isn't right, but I'm not quite sure what to do next... 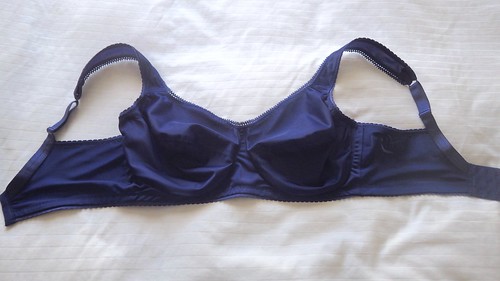 I've been reading Demystifying Bra Fitting & Construction, by Norma Loehr, and one of the things she mentions is that multi-piece cups are better for round breasts. So now I'm thinking I should focus on a different pattern. Initially, I thought of the Pin-Up girls Shelley pattern (and I may still try it), but I just learned via Sew Pretty in Pink about the free Maya bra pattern from AFI. It's in the beta testing stage, but I think it might be worth a try because the other challenge with bra-making is that it can get pretty expensive. I've already spent $$ on a pattern, two kits, a book, and a Craftsy class, and I'm still struggling with getting the fit right.

Speaking of kits, I'm not super crazy about the feel of the duoplex fabric in the Bra-makers supply kits, so I'm looking at other fabrics now. I'm worried that changing the fabric will mean starting over with the whole fitting process, but maybe since I'm trying a new pattern it would be a good time to try a different fabric. At any rate, I've ordered a hand-dyed kit from BravoBella that includes tricot (she recommends two layers for stability). I like the paired down look of the kits, and they're $10 cheaper. Also, she offers a variety of different nude shades, which is pretty awesome. Of course, if I really wanted to save money I could've sourced the supplies separately....Ah well, live and learn... and I am indeed learning!
Thanks so much for reading. Would love to know your thoughts on bra making, the best fabric types, etc. There really is a lot to learn.