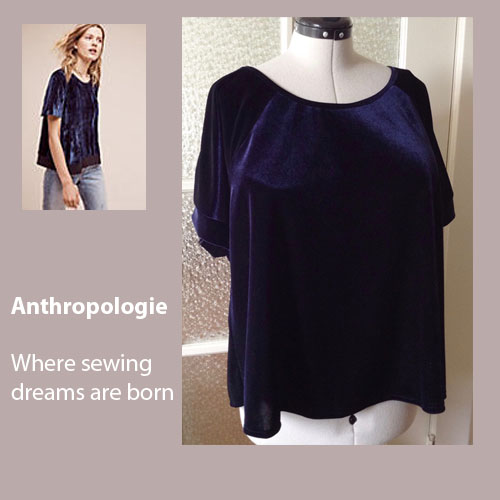 Velvet Bandwagon? Sounds like my stripper name or a '70s tribute band. Anyway, hello and happy New Year! This is seriously just a quickie as my pictures are few and crap, but I do miss blogging so I'm jumping on to tell you about the Hey June Santa Fe top I made. Inspired by this Anthro top and the current velvet trend, I knew I could easily approximate something similar. And unlike the Anthro version, this would fit my body and not cost $88. It's not exactly the same, of course. I didn't buy a beautiful crushed velvet, and the Santa Fe is a raglan, but I was happy to have something festive and even a little trendy for various holiday events. I purchased the blue velvet at Fabric Outlet. It feels a little cold and synthetic on the inside, but I didn't feel like spending a lot of cash on something that probably isn't going to get a lot of wear after the holidays. I think it was around $10 per yard. Apart from making sure to cut all pieces in the same direction due to the fabric's nap, I didn't have any particular issues sewing it up. I went easy with the iron and basted the cuffs and the neckline first. I'm finally learning how awesome and time-saving it is to baste slightly trickier pieces. It's way faster and more accurate than pinning.

I like the Hey June top a lot. I like the swingy shape and the sleeve cuffs. The neckband went in nice and easy. I made version F. There are a million variations, which is an awesome quality in a sewing pattern. I made the largest size (2X) without an FBA. There is tons and tons of ease and that's just what I wanted.

Alas, my modeling pictures were all crap. Bummer. But I'm going to make another as soon as I can find a knit I adore. (Shouldn't be hard; I have over $300 in gift certificates to spend at Britex. WhooHoo!) So I may blog this again. 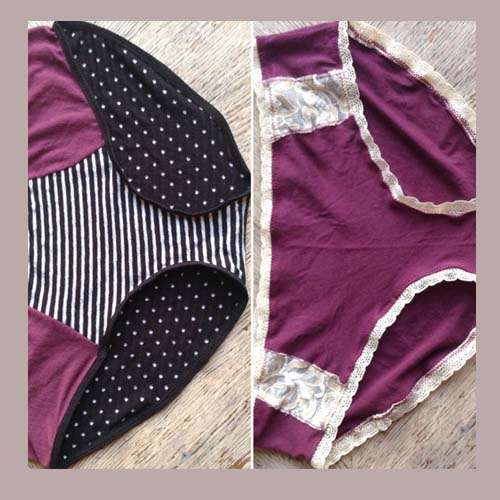 In other news, I made some underwear a while back. These are the Seamwork briefs. I went down a size, though it may not look like it as they're full-coverage undies. I hadn't made the version with different side panels or the lace inserts before, so I thought that would be fun to try. And it was. An added bonus, you can use up even smaller scraps this way! The pair on the left are reversible--polka dots on one side and stripes on the other.

I hope to do a Top 5 post in the next week if time permits. In the meantime, just wanted to say hello and wish any folks out there a very happy New Year. Cheers!