Underneath It All: Claudia, Frankie, and Celeste 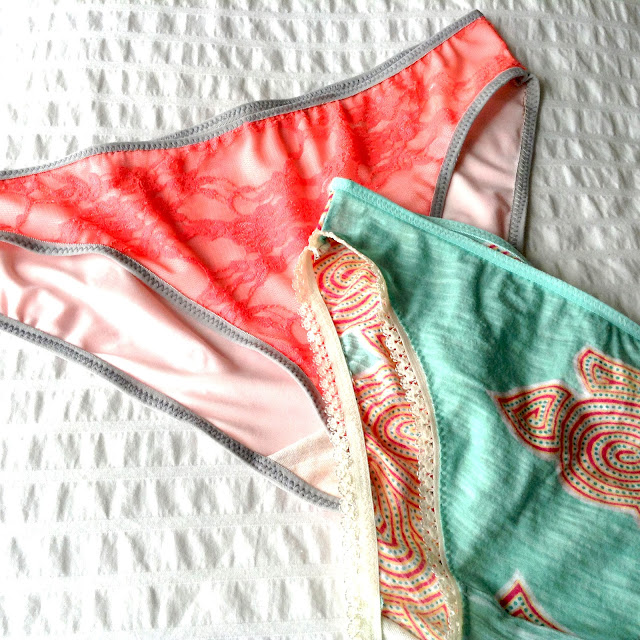 Hey there! Happy Labor Day to those in the U.S. We had a heatwave for a few days in San Francisco with temperatures reaching 104 degrees. No bueno in a small, top floor apartment without AC.  I'm thankful for the inevitable fog that's cooled us down now and will try to refrain from complaining about foggy summers in the future. While I impatiently waited for a white rayon linen voile to arrive so that I can make another Kalle shirt, I made up some frilly knickers. You would think that with my many posts about making underwear, I wouldn't have anything new to say. Well, my friend, you would be wrong. I even had to draft a rough outline so that I could remember all of my links, tutorials, and random musings.

In the past, my underwear making has been more closely tied to frugality and practical purposes. I find having too many fabric scraps overwhelming, so I often make up a pair of undies right after a knit project since both machines are already threaded with matching colors and the correct needles. In fact, I'm so good about using up my scraps that sometimes when I'm in an underwear-making mood (more on that in a minute), I have to find fabric by cutting up old jersey tops and failed/unworn sewing projects like I did here.

Recently I found myself between projects in just such a mood. As usual, I didn't have a lot of large-enough scraps, but I had picked up some stretch lace at Fabric Outlet and decided to focus less on practicality and more on pretty. To my delight, I also discovered a new pattern in my stash that I'd forgotten about.  Then, while looking at sewing tutorials online, I discovered a new lingerie pattern maker. So many discoveries on a Saturday. 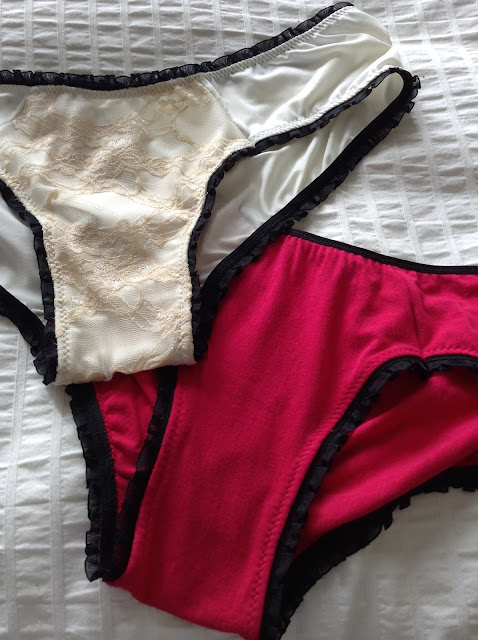 First up are the Claudia Hipster Panties, by Ohhh Lulu. It's a super cute pattern. The finished result always looks so much bigger than RTW, but then you put them on and they fit great. I love that you can use lace for the back and the sweet, feminine shape. For the fuschia pair, I cut up a tee that I never wear in a lovely bamboo rayon. The white pair is made from a stretch knit (poly and rayon, I think) I had initially purchased to line a long-abandoned knit project. I covered the middle piece with sheer lace, dabbing a little with a fabric glue stick and then basting together. They were starting to look a little bridal, so I trimmed with black elastic.

Whenever I make undies, I want to make a million pairs. Not exactly like assembly line style, more like I want to spend hours and hours experimenting and then throw them all on my bed and admire them. (Kind of like in heist movies, or when people hit a big jackpot when gambling, and they throw all the money on the bed and roll around in it.) I didn't actually roll around in my undies, but I did gaze admiringly. 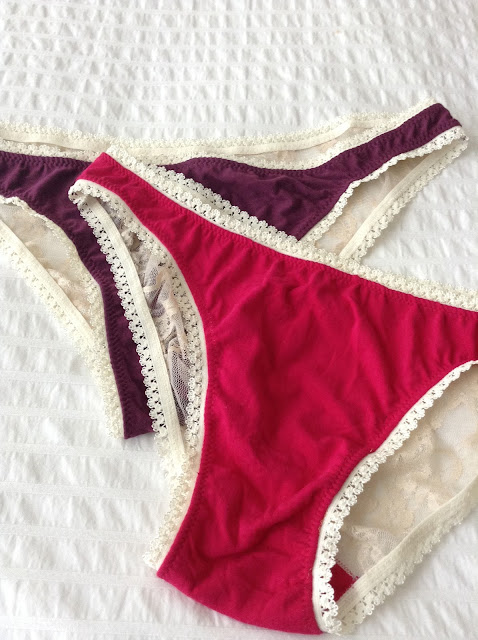 These are made with the Ohhh Lulu Celeste pattern. I used the free version. I only had a little of the fuschia bamboo rayon and one maroon scrap, so I experimented with mesh lace for the back. They turned out so cute, and I was so happy that I had randomly bought some stretch lace. Sewing bloggers talk a lot about sewing with intent and out-of-control stashes, but sometimes it's really nice to have a collection to play with when the mood strikes you. As for laundering, I was concerned that the mesh would fall apart immediately, but so far they've held up well. I wash them inside a lingerie bag so they don't get too manhandled in the main wash. I've also kept them out of the dryer.

When I blogged about the Celeste undies before, I mentioned discovering a treasure trove of underwear-making youtube videos. In fact, I'm reposting this video about sewing leg elastic that rocked my world. This time I discovered videos by a new-to-me lingerie pattern maker--Evie La Luve. Her aesthetic is similar to Ohhh Lulu, and she has a ton of helpful tutorials. Here's a link to a free high-waist undie if you want to check her out. I decided to try the Frankie pants. They have a few cute lace overlay pattern pieces and include instructions for a multitude of variations. I made an unblogged practice pair out of an old jersey top, wore them all day, and found them to be very comfortable. (BTW, I made the largest size for all patterns mentioned in this blog post. Ohhh Lulu recently expanded her size range to XXL (43" hip size). I'm hoping that we'll see that trend expand to become more inclusive.) 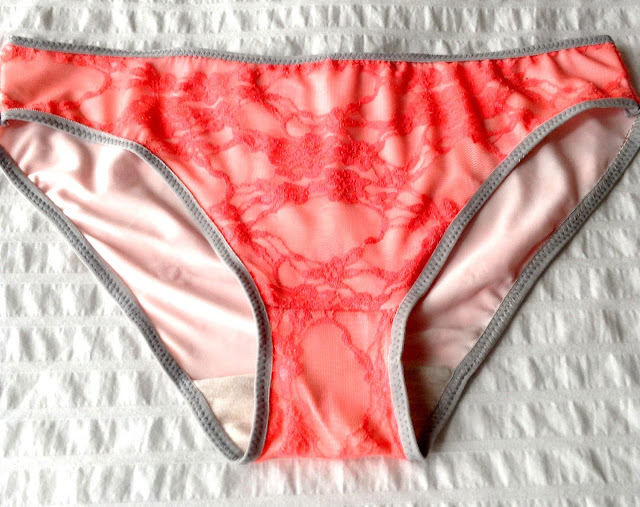 The neon lace pair are lined with the ivory poly I mentioned previously. They feel a little like swimsuit bottoms with the double layer. I had to try. It's so easy to experiment when the projects are on such a small scale.

The main thing I want to say about these knickers is this: Enclosed crotch seams. Total game changer. Here's a link to her very excellent and clear video on how to enclose crotch seams. It's similar to the burrito method in shirt making but even easier. The bottom photo shows another pair from the back view. They were sewn from an old, well-loved and well-worn, Anthro tank that had shrunk up over time. 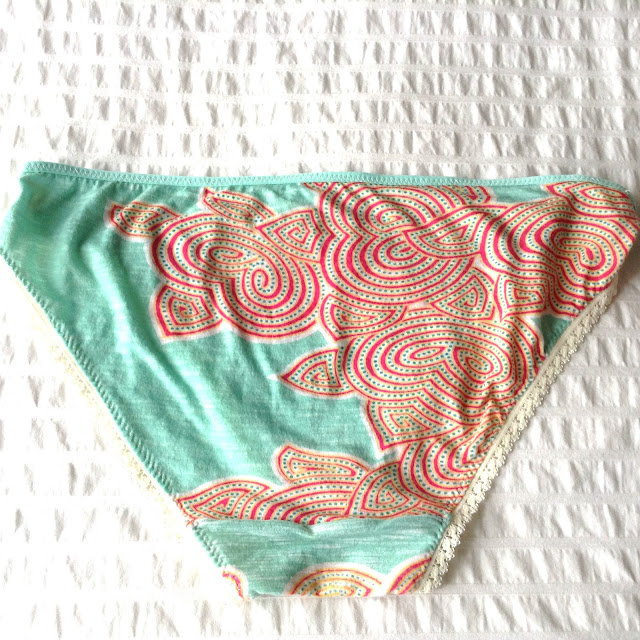 I thought a lot about the colors I'm drawn to and the notion of indoor/outdoor and seen/unseen clothes while I made these. The clothes I choose to wear on the outside are very different from my underwear palette. I would never wear neon lace on the outside, but underneath it's so appealing to me. At some point, I'd like to explore this aspect of my personal aesthetic further by making some colorful pajamas and a luxurious robe/kimono.

If you like making underwear, I would suggest keeping a box of elastic, lace, colorful and interesting fabric scraps, and stretch mesh to play with. Let yourself go crazy and choose colors that you might not choose for a top or dress. At the end of the day, this sewing thing shouldn't feel like a chore; it should be fun.

Thanks so much for reading and have a great week!
Posted by donna at 7:11 PM