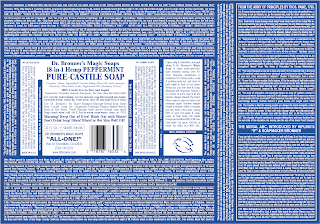 I haven't had as much time as I would like to peruse the awesome book Barry gave me for our first wedding anniversary, Graphic Design Referenced by Bryony Gomez-Palacio and Armin Vit, but I thought I'd share a bit from it about Dr. Bronner's Magic Soap.

Barry loves this soap because it doesn't have chemicals (that we know of) and for its versatility. I kind of dig the crazy graphic layout of the label. Apparently, there are around 3,000 characters, quoting Thomas Paine, Abraham Lincoln, Albert Einstein, Booker T. Washington, among many many others.

Here's what they had to say in Graphic Design Referenced about Dr. Bronner:

"In the 1940s, now a self-titled doctor, Bronner began to draft and persistently share a plan for world peace in 'Spaceship Earth' through unity of religion. In 1945 Dr. Bronner was arrested for speaking without a permit at the University of Chicago and institutionalized in the Elgin State Insane asylum. He escaped six months later and fled to Los Angeles. There, in his small apartment, he began mixing soap with a broom handle, which he sold while expounding on his theories at the Pershing Square public park. When he noticed people bought his soap but did not bother to hear him talk, he started writing his philosophy on the labels."

Wow. So now when I look at the label, it kind of makes sense that the person who designed it was extremely eccentric, to say the least. What does that say about me that I think it's kinda cool?

But I guess it's not just me. Apparently, the label is here to stay. Even if the company gets sold, there is a provision in the company's charter that the label must remain the same.
Posted by donna at 11:47 AM