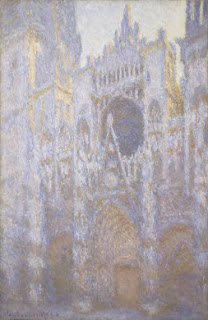 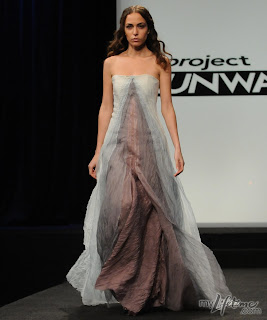 Is anybody else annoyed that Gordana was auf'd after creating this lovely dress inspired by the 1894 painting of Rouen Cathedral by Claude Monet? This has actually been on my mind a lot since Thursday. Maybe a little too much since I do actually have a life and things I need to do, and shouldn't waste my time obsessing over a reality show. Still, I have been thinking about this and since I have this little blog, why not explore the topic and see if anyone else out there has any thoughts?

First off, let me just say that Gordana isn't even my favorite designer. I've liked a lot of the things she's made - some, not so much. But her recent elimination has struck a chord in me that has to do with uncomfortable power dynamics and the frustration that comes with playing by the rules and still losing.

To me, Heidi as always been a bit of a contradiction - annoying because of the repetitive script she has to deliver, but also entertaining because she seems like the kind of person who doesn't take herself too seriously, genuinely appreciates and is in awe of the designers' creativity and is really only playing a campy, dominatrix-like role when she is the stern judge or taskmaster. However, this season I found her harsh treatment of Gordana increasingly uncomfortable to watch. Week after week, I watched as Gordana struggled to keep up her morale and fell into a trap of trying to please the judges. Even when her work was in the top three, Heidi praised begrudgingly, often qualifying her remarks with, "You did a good job, this time." Poor Gordana looked so beaten down and exhausted by the end of it. Because it's Heidi's show and because she was the only consistent judge, she had absolute power over Gordana's fate. It felt like bullying of the weak by the strong and, as I said, was just really unpleasant to watch.

So the power dynamic was uncomfortable, but what was also annoying about Gordana's aufing was the way in which any sense of contest rules or any semblance of fair judging was so flagrantly disregarded this season. As viewers, we know going into a reality show that judging can be arbitrary and many decisions are based on telegenics and marketing; however, this season it's like Lifetime and the judges didn't even try to appear impartial. The challenge was to create an outfit inspired by a work of art in the Getty. While the judges agreed that Gordana's dress most effectively referred to the source of inspiration, which sounds like the whole point of the challenge, she was still auf'd. For more on this, Chris March set aside his usual snarky wit and wrote quite eloquently over at Lifetime about the price versus cost of the judges' decision. Good for him for telling it like it is. I hope Lifetime still asks him to blog next season.

I think many of us can relate to Gordana's frustration. Ever lost out on a job because of your age? Ever had a boss whom you could never please, no matter what you did? Ever tried to dispute an unfair charge or bill only to be buried in endless paperwork? I guess, in a way, the only thing real about reality shows is that they help to illustrate the point that life isn't always fair. You can do everything by the rules, and you can still lose.

Okay, so I'm almost finished with my rant, but I do want to end with the one positive bit I gleaned from this PR episode:

I'm sure by the time the final challenge came around Gordana knew she wasn't going to Bryant Park, and I felt that her final effort was kind of like her swan song. After so many weeks of watching her try to please the judges, I loved that she decided to just go for it and make something that really meant something to her, something that spoke to her spiritual side. Wouldn't it be great if we could tune out the static and criticism and follow our inner voice in all our creative endeavors. That's what I love most about her final design - she put her heart into it and it shows.

So here's the rest of the PR final five and their inspirations. I'd love to hear what you think!

Althea - Inspiration: The architecture of the Getty

Christopher - Inspiration: A fountain at the Getty