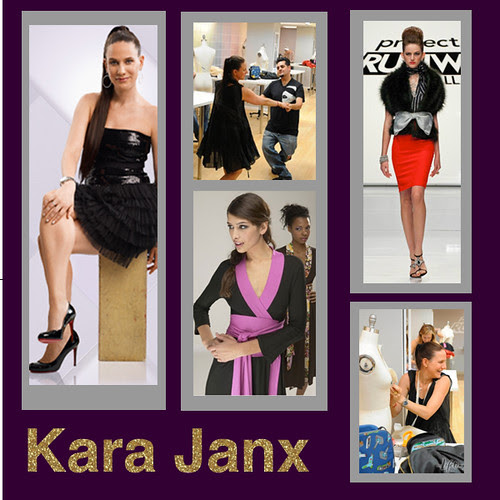 My husband and I often disagree over the concept of irony. For example, while I find it ironic that a theatrical personality like Kara Janx does not excel at costume design, he might suggest that is a coincidence rather than irony. However you want to define it,  Kara's wonderfully wacky and emotive presence will, I'm sure, be missed by everyone with the possible exception of Mila.

Mila... what a sourpuss. I really get the feeling with the other All Stars that they are just trying to get through the season without making complete asses out of themselves, hopefully parlaying  it into steady work for the next few years. If you make a few friends along the way, all the better. Mila's "this is a competition" attitude seems so last season in comparison. 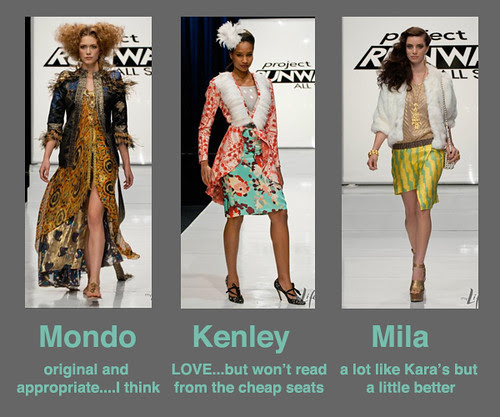 And congratulations Mondo! He's such a smart designer, especially given the confusing direction - east village, thrift stores, conspicuous consumption, looks patched together over time, wealthy, thief, humorous - what? Admittedly, I'm not familiar with Godspell. Neither is, I presume, Angela Lindvall.

(One of the true LOL moments was her voice-over  "a rock opera about Jesus and his apostles" clumsily added in post production. Maybe it was funny because of her kindergarten teacher style of communicating with pretty much everyone or just bad editing...I don't know)

I did look at some youtube clips from the movie version, which looked like a whole lot of 70's awful,  and pretty much confirms that I never, ever need to see the play. It's hard to know what kind of information and/or imagery the designers were going on, but I did notice that Mondo was the only one shown actually studying the program while the other designers sketched.

Once again, I liked Kenley's direction, and I think there is something really fresh and clean about the way she works with colors. I agreed with Georgina (or maybe it was the guest judge), though, in that there wasn't enough contrast if seen from a distance.

Mila's was a little hookerish but also kind of cool. Don't get me started on Austin, Michael and Jerell. I thought they were all hideous. Why does Michael get praised for making his model look so old all the time?