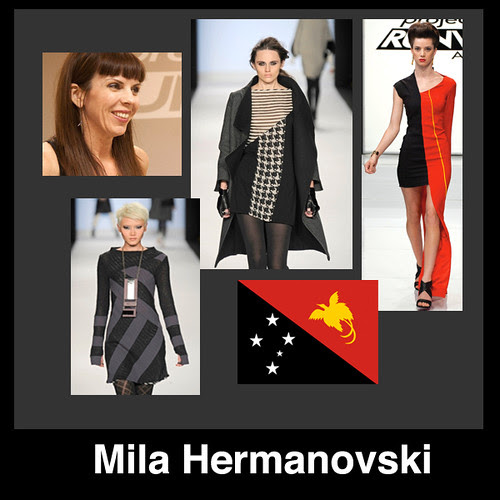 Farewell, Mila. I know I called you a sourpuss last week, but you're also a really great, really thoughtful designer.

I was just looking at her final collection from Season 7. I had forgotten how much I loved her clothes. I love how Mila is so true to her point of view; it's what makes her such a strong designer. She pushed herself in many of the challenges and should definitely NOT have gone home this episode. Looking at her flag next to her garment, the colors are spot on. Maybe the severe styling with such a jarring dress was what made Isaac think of the former Soviet Union flag since it's also bright red with a small amount of yellow. I dunno... 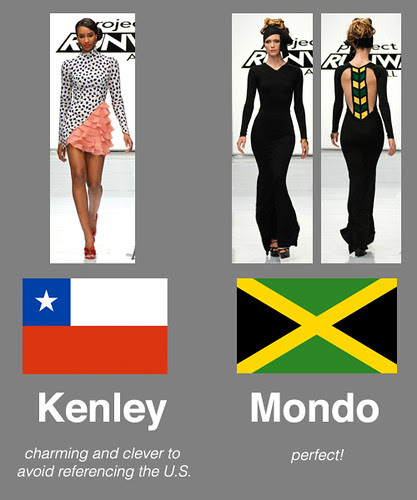 Mondo directed an awful lot of trash talk in Kenley's direction, but I can't help but think he's a little threatened by her mad sewing skillz and strong point of view. She took one of the hardest color combinations (Austin had the second hardest with his primary color/ beach ball flag) and took the viewer away from any association with the U.S. It probably helped, though, that her colors strayed away a bit from the true flag colors.

Mondo's was perfection. I know it's the same shape as his famous polka dot dress, but I wasn't bothered by that. I don't understand this idea that designers are supposed to come up with completely different silhouettes every episode; there are other ways to innovate. Isaac's criticism about the back was silly. If he hadn't made the green and yellow chevron back piece he would have been dinged for not fulfilling the challenge.

Which brings me to a small rant about criticism: First off, I was actually proud of how Kenley handled her critique from Isaac. I feel like the old Kenley would have gotten defensive and snapped back at him. Second, Kara brought up something Isaac said about one of her garments during the after show, and Isaac's response was something like, "Oh, that was a figure of speech." In other words, some flippant comment he made had seriously weighed on her. How do you separate the wheat from the chaff in terms of criticism? Critiques can be super helpful, and all of the designers should be able to receive criticism at this point in their careers, but it must get frustrating to have thoughtless, random comments thrown at you. Ah, reality television... 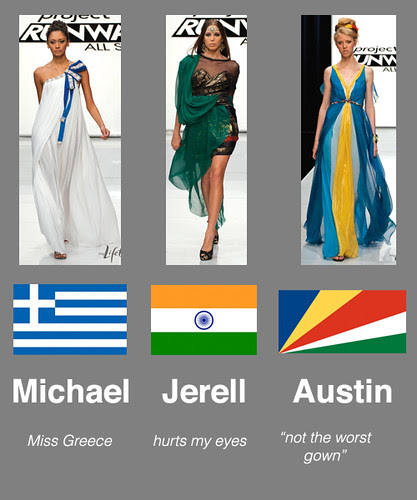 And then there were these three looks. To my mind, Michael and Jerell had the easiest flags; simple, non specific color combos and their respective countries are both associated with specific fabric usage.  Both took it way too literally - no innovation, cheesy embellishments, cliches. I suppose that Jerell's shape had some interest, but he ruined it by throwing a lot of crap on his model. Austin's dress "wasn't the worst," and, as I noted before, he had a challenging flag.

Next week...? No idea. Things are heating up, though,  so I expect more trash talk. Hopefully, Kenley stays in the game without Kara's sisterly support.
Posted by donna at 11:39 AM