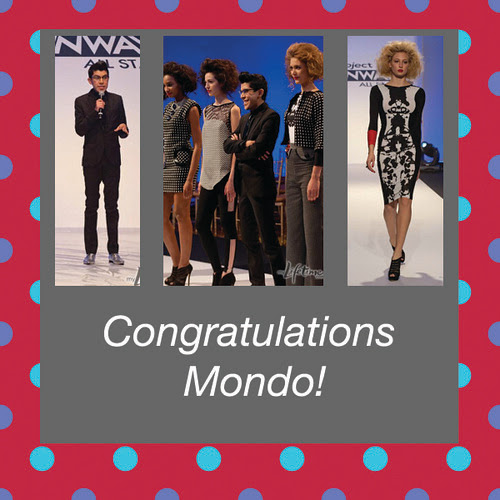 Well, it's over. Project Runway All Stars began with such a bang, but unfortunately it fizzled out like one of those firecracker snakes that sort of die towards the end. That said, I'm always impressed by what the designers can crank out in just a few days. Austin's lace dress was really special, but the rest of his collection, though interesting, seemed too narrow in scope. Of course, he did only have a few days.... Michael, on the other hand, didn't really try in my opinion. I think he knew he wasn't going to win, and he just wanted to show that he could handle losing this time without bawling like a baby. Good for you, Michael.

So congratulations, Mondo! All hail the polka dot prince. You got an even bigger prize than the one many felt you deserved in Season 8. So it all worked out.

I just think it's a shame that Lifetime couldn't give them more than a few days. It doesn't seem fair to judge their collections alongside other season finales because they weren't given a chance to renew, recharge and create a thoughtful collection.

But, hey, we got a lot out of this season:
So yay! We had some fun watching some talented folks jump through a lot of hoops -  all from the comfort of our living rooms. For those who say that they're never watching the show again, I would say, "Yeah, right." I'd watch another season of All Stars. I'd even recap it... totally!

Thanks so much to those of you who have been following along on my blog! Out of curiosity, who do you think they should cast for the next All Star edition?