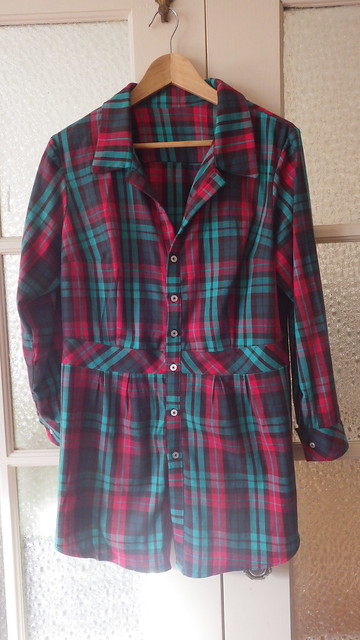 Hello! Hope you had a lovely weekend and your new week is off to a great start. Beej and I actually got out for a bit this weekend for brunch at Greens and an art exhibit at Fort Mason, which gave me an opportunity to wear my first Deer and Doe Bruyere tunic.  Let me just get this out of the way: I made a number of silly mistakes, resulting in a button-down that's too big, but I still like it.  The relaxed cotton fabric lends itself to a casual feeling, so I'm okay with it being slouchy weekend wear. It feels a little like the 90's (a decade I remember all too well) but also with a twist.  I'm nearly finished with another version in a crisp cotton and have followed the instructions to the letter. The results are much different. Should I have gone for an easier fabric in a solid rather than plaid? No way. Once I saw this awesome, super loud, cotton-blend plaid at at Discount Fabrics for 6.99 a yard, I simply could not get the idea of a plaid Bruyere out of my mind until I had made it. Sometimes that's just the way. More and more I'm finding that rather than making muslins, I'm making first drafts. I don't do a careful enough job in terms of cutting or sewing on a muslin (the way I do with my fabric), so it doesn't help me all that much. I also don't get a clear idea what something's going to look like  because I rarely have a muslin fabric with similar characteristics.  And since I almost never spend very much on my fabric choices (like $7 or $8 a yard at the most),  I feel okay with working with my intended fabric. It's not like I'm being all cavalier with fancy silks or wool blends. 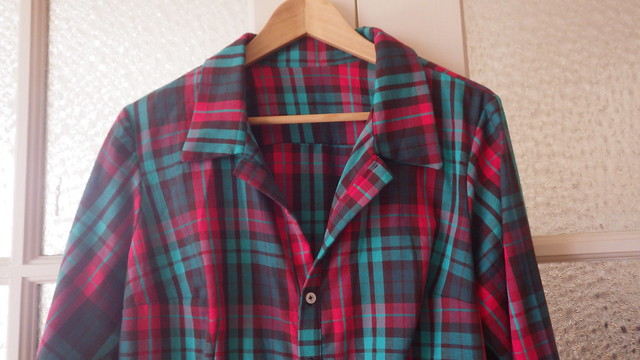 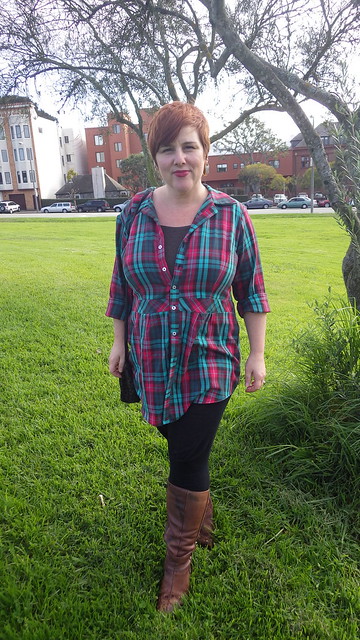 So let's start with all my mistakes. Not because I feel the need to publicly shame myself, but because I'm hoping to learn by taking notes. And if you were planning on trying this pattern and sometimes make silly mistakes like me, maybe I'll save you some time and/or frustration. Happy to oblige. 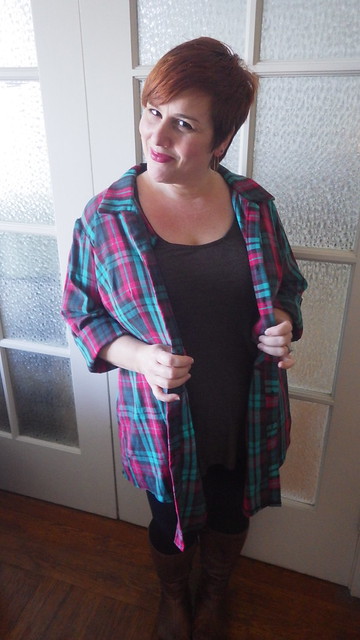 But at the end of the day, it all worked out fine. Like many of my projects, it's, um, *weekend wear.* It's still a marked improvement from my earlier projects, that were either *sleepwear* or *no-wear.*  I had a lot of fun making my first Bruyere and I loved wearing it on our little outing yesterday. BTW,  forgot to take pictures of the back view. Sorry. There's not much to see except by then I had figured out the box pleats.

Also, the brown tee underneath my shirt is another Plantain made by yours truly. I love that free pattern so very much. Do you also find yourself wanting to make some quickie projects after finishing something more complicated? Speaking of quickies (super awkward segueway, I know) here are a couple of pairs of Cake Espresso leggings. We're moving into the time of the year when our apartment is cold ALL the time. Seriously, that's the downside of old San Francisco apartment buildings. You get hardwood floors and charming architectural details, but you pretty much freeze your butt off for most of November and all of December. I will live in these leggings.
Some cotton/spandex daisies from Wanderlust fabrics. 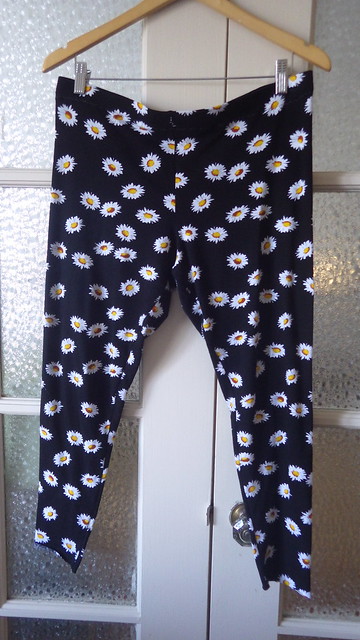 And some olive spandex cotton - also from Wanderlust. This knit is thicker than the daisies. I also made a tee out of this green knit, but did such an abysmal job with the neckband I didn't bother to photograph it. It's *workout wear.* :) 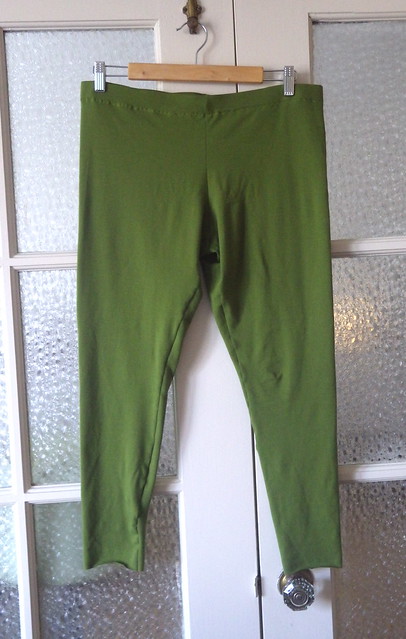 That's all I've got. Thanks for reading and have a great week!