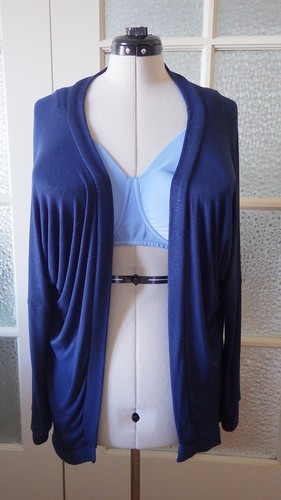 Hello! Hope you're having a fab weekend so far. I made this HP Fast and Fab Halycon Sweatshirt last weekend, and, as I'm sure you can surmise from the above pic, it's not really a sweatshirt anymore. This is what it's supposed to look like... 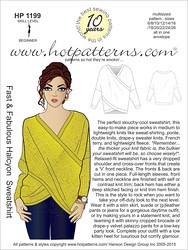 And here's what it looked like before I turned it into a cardigan.... 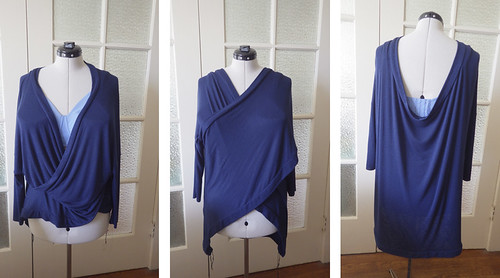 I made a size 18 and shortened the sleeve by 3/4 inches. It was HUGE in the back, with an awkward straightjacket-like feel in the front, and the sides coming down to a weird point. I'm not exactly sure what happened. Some possibilities:
Even though this was a test version, I wanted to try to salvage the fabric. It's super soft and a pretty color after all, so I turned it into a cardigan by unpicking the crossover side seams and and joining the bottom of each front to the side. Wow, there has to be an easier way to explain this. It's actually a lot simpler than I've just made it sound. Anyway, I wanted to turn it into a waterfall cardigan, but after examining a bunch of waterfall styles I noticed that the waterfall effect is dependent on the way it hangs from the shoulder seam. Since this style doesn't have a shoulder seam, I wasn't sure how to create that effect. So I ended up with more of a cocoon shape. A little wonky and loosy-goosey but okay for knocking about the park, or after yoga class (which reminds me, I really should start doing yoga). Here's me wearing it at the botanical gardens last weekend. The magnolias are in bloom 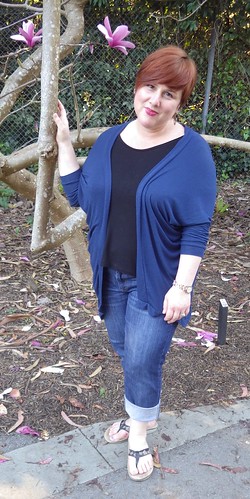 As you can see the sleeve is an exaggerated dolman. I'd like to figure out a way to fix that, but my craft-A.D.D. is kicking in, and I'm already thinking about other projects. I just want to add that I like Hot Patterns styles a lot. They always have fun construction details.  Just because this pattern didn't work out for me doesn't mean that it won't work for you. I would just recommend that you sew up a practice version in something you're not in love with before cutting into your silk jersey, but you know that already!

Thanks for reading and have a terrific weekend! 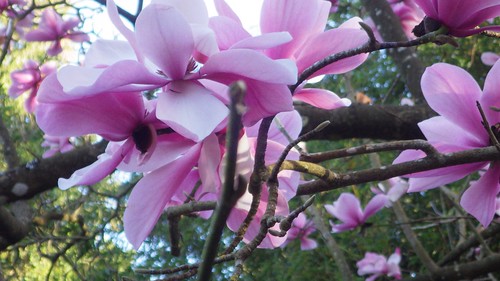