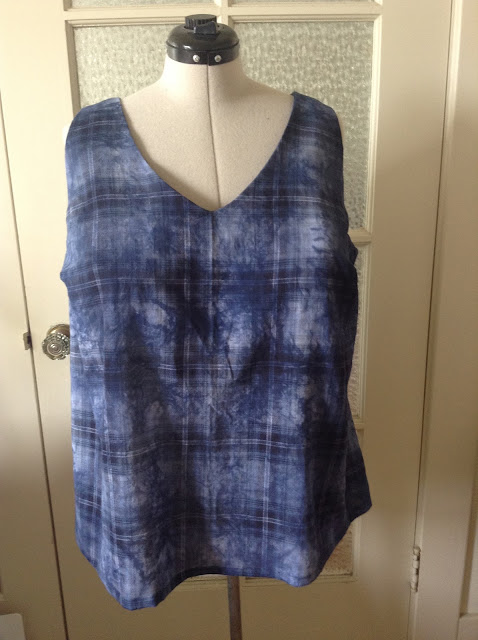 Hey there! Hope you're having a good week. It's pork chop Wednesday here in my house, which means that Beej does the cooking (usually pork chops -- hence the name), and I get to relax, look at blogs, work on projects, etc. I spent some time cleaning my serger and modifying a pattern and decided that was enough work for a Wednesday night. Then I realized that it's been a while since I wrote about my latest projects so here I am.

So, the Webster by Cashmerette...what a cute pattern! I was immediately smitten. When Jenny first announced her pattern company for curvy ladies that would include different cup sizes, I was beyond excited. I mean, I think I'm in the key demographic since I really need to FBA everything I make. Strangely, though, I haven't made a Cashmerette pattern that's really thrilled me yet. There was this very well fitting, albeit poorly sewn, Springfield and a couple of Concords that I didn't even blog about, but overall I haven't made anything I'm super pleased with. I have a couple of theories: First, since it's a new company, she's been designing a number of basics that fill a hole in the market but are not the most exciting to make. Second, and more importantly, you really need to consider your comfort level in terms of how close fitting you want the bust to be. The patterns are designed to fit curvy plus ladies close to the bust, providing an alternative to the many oversized tent-like patterns in the plus size market, and I definitely prefer not to have my bust featured too prominently.  I've probably been conditioned over the years to gravitate to looser clothing--both from growing up in the oversized '80s and from trying to escape the unwanted attention and unsolicited comments that can come from having a large bust. Now that I'm middle-aged and invisible this is less of an issue, but old habits are hard to break. And finally, there are also just certain styles that we gravitate towards, and personally I like the look of clothes that are loose and flowy and a bit oversized. So with Cashmerette patterns, I think I'm still figuring out the ideal silhouette and amount of bust ease for me. 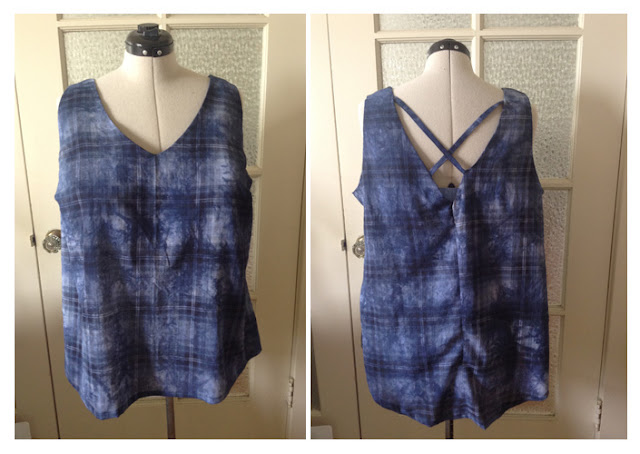 With the loose fit and opportunity to use silky fabric, the Webster seemed more like something I would be interested in wearing. For this version, I could tell pretty early in that it was going to be too big, so I rushed finishing and pretty much botched the back. It's okay, though, because once I realized the size was off, I knew it would only be worn under a cardigan. You might wonder how it is that I made a well-fitting Springfield and then managed to get this one so wrong. Apparently, I didn't bother to read my own blog to check the size I used previously and made an 18 GH instead of a    16 EF. What the hell was I thinking? Total brain fart, I tell you. Good thing this was an inexpensive voile from Fabric Outlet and only intended to be a wearable muslin.

So now that I've chastised myself for spacing out over the size and relived humiliating high school memories, I want to talk about something else--marking fabric with printed pdf patterns. Those little tracing wheels just don't work for me with the thick copy paper. Hell, they barely work with thin pattern paper. I've tried punching holes with an awl and using different types of mark-making tools such as chalk, those white pencils that barely make a mark, and frixion pens, which are no bueno for dark fabrics. None of these have worked very well for me. I'm not sure if this is "legal," but I had this idea to cut out the dart and trace the inside with a chaco pen. I think I'm on to something. Can anyone think of a reason why this might not be a good idea? I've been teaching myself to sew from sewing blogs, so I really value input from experienced seamstresses on stuff like this. 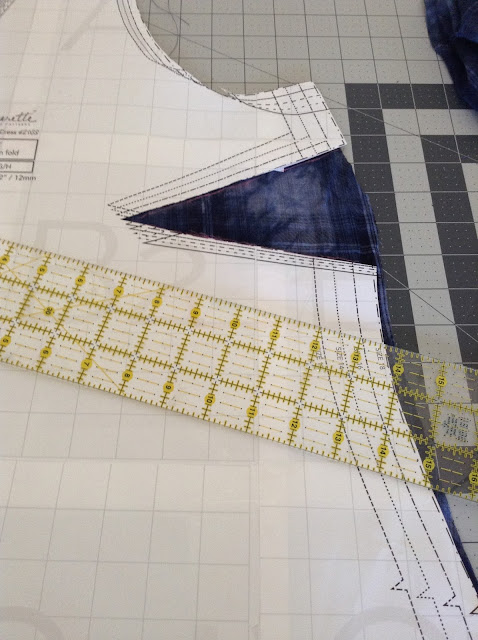 Finally, here's a pic of me wearing it as intended--i.e., covered with a Blackwood cardigan from Helen's Closet. I've been making lots of cut sleeve styles lately, so it's actually great to have something without sleeves that fits so well under a cardi.  I like that there's very little gaping despite the size goof and that it's designed so that your bra doesn't show. Very clever.  Will definitely make another version in the next cup size down. 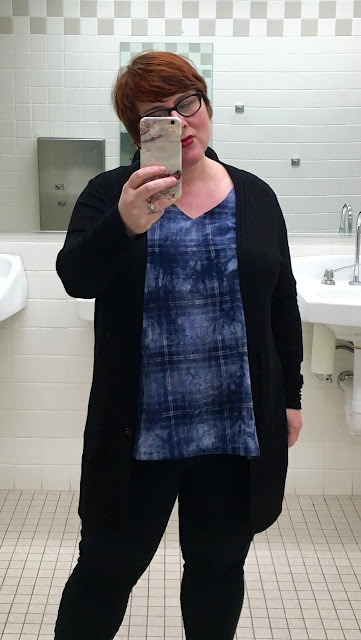 Nothing says glamorous blogger like ladies room phone snap at work.  I should really quit trying so hard. :)

Thanks so much for reading about my project. Hope you have a fabulous week!