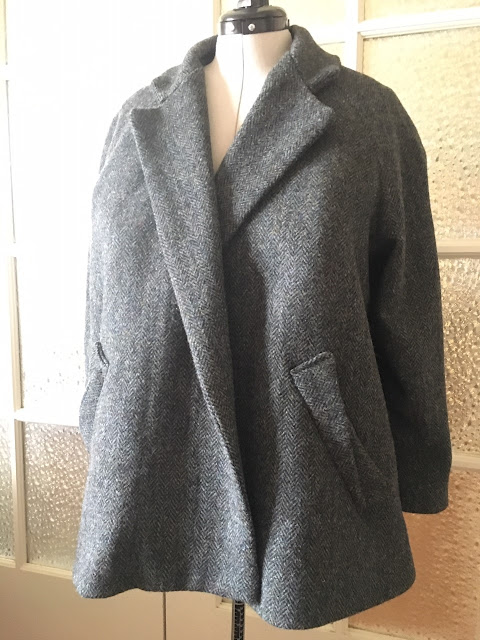 Well, hello and Merry Everything! I'm in the midst of a glorious four-day weekend to celebrate Christmas and recharge. I have one gift to complete, as well as a couple of quick projects I want to finish before the new year, but, really, I'm just enjoying nesting and being super cozy.

So, per my boring post title, you've undoubtedly surmised that I'm here to talk about my last big project of 2018, the Deer and Doe Opium Coat. I was slightly hesitant because of the swing shape on my petite plus bod, but only slightly; I really try not to let myself be limited in that way, although it can be a challenge. I wanted a coat with a notched collar rather than a shawl, and I also didn't want the headache of setting sleeves. The Opium has easy raglan sleeves and looked like it would appear tailored without being too fitted...if that makes sense. Also, Deer and Doe patterns tend to work for me; the torso isn't too long and there isn't crazy tons of ease to account for.

Gosh, I have so much to say I don't know where to start. Okay, let's start with the fabric, and then I'll move into the fitting. That way if you aren't interested in me blathering on about wool, you can skip down to the fitting notes. 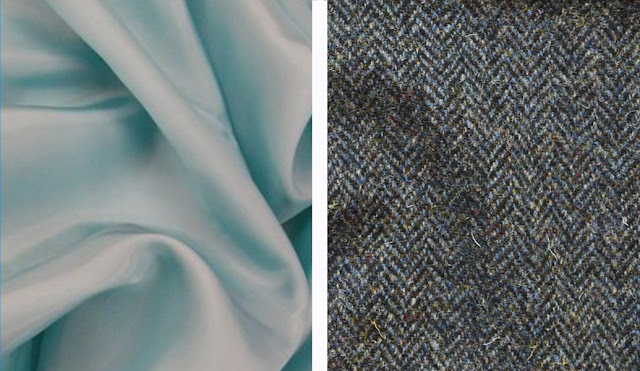 The Fabric: Multi-Color Herringbone Wool Coating
The wool is a really beautiful herringbone tweed from La Mercerie.  I jumped on it because I feel confident in the quality of her fabrics and because it was deadstock from a Pacific Northwest retailer. Good thing, too, because it sold out very quickly. It's a very thick, heavy tweed with beautiful, subtle coloring.

The lining is Bemberg rayon in Mist from Stone Mountain. I love how the light blue picks up all the blue flecks in the wool. Also, using rayon instead of a poly makes the coat feel so much more luxurious and less sweaty and cheap.

I couldn't wash the wool, so I spent a fair amount of time steaming it and, in doing so,  discovered this certification mark. 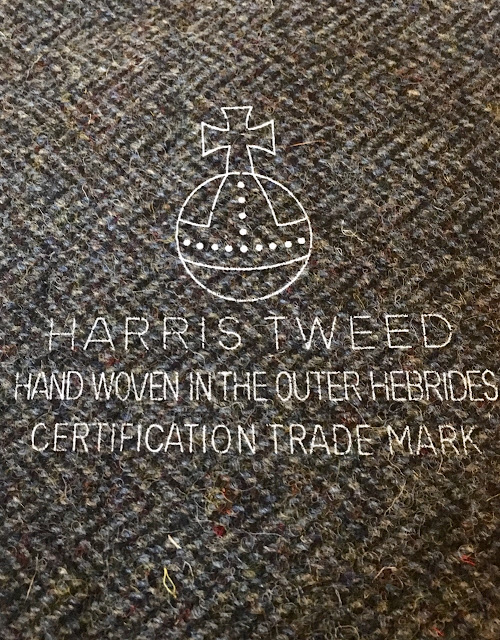 This discovery, of course, led me down a rabbit hole and to this lush video of the outer Hebrides and the Harris Tweed weaving process. The most important thing I learned from the video was how to pronounce "Hebrides." Being American, I naturally started off by saying "Hee-brides," but it's actually, "Heh-brih-dees"—preferably spoken with the trill on the "brih" you would get with a Scottish brogue.

Now, Harris tweed is a really lovely product, and it's not often that I get such a strong sense of provenance with my fabric. (Usually, I'm just lucky if I know the country of origin.) But with this tweed, there's this whole tradition. They pass all the twists through beeswax to make it more water repellant, and the wool is dyed in colors that reflect the landscape of the Hebrides. You would think that would make cutting into it more intimidating, and, at first, it did. After all, through sewing, I've gained a newfound respect for craft and for the textile processes. But I also reminded myself that they make a LOT of tweed for the retail industry. I could just as easily buy myself a coat made from Harris tweed at Banana Republic or J Crew. Of course, doing so would be less fun, give me nothing to blog about, and my coat would be WAY too long in the arms and probably not fit my boobs. So, anyway, I just went for it. No regrets. Now on to the fitting... 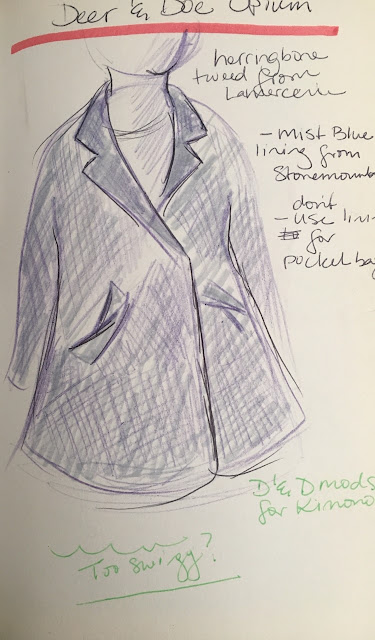 The Fitting
Even before I discovered how special my tweed was, I had planned to make a muslin. But also, I was a little cocky and felt that I had an advantage since I sew a fair amount of Deer and Doe patterns and had made the Nenuphar kimono jacket earlier in the year. This is to say that, while I did make a muslin, I was really just going through the motions so that I could get to the fun part of sewing up my coat. Big mistake.

For starters, I haaate sewing with muslin fabric. It's scratchy and gross. Often, I use old sheets, but I didn't have any this time around. As I was working on my muslin, ironing the seams, the steam brought up a sour odor that I suspected was some kind of animal urine. It had never occurred to me to wash muslin fabric before sewing since it's only for testing the fit, but then I started thinking about how it probably comes into contact with all kinds of critters during the manufacturing and distribution process. So, once I had that in my head, I rushed even more and really couldn't wait to get it out of the house. I had applied my usual DnD mods in the muslin but ended up having to take a lot more off the length. I'm not a true petite. I have a slightly shorter torso and neck, but my shortness is mainly based on the length of my legs and arms.

Here are my mods and construction notes, followed by some super awkward toilet selfies: (Must up my blog-picture game for 2019) 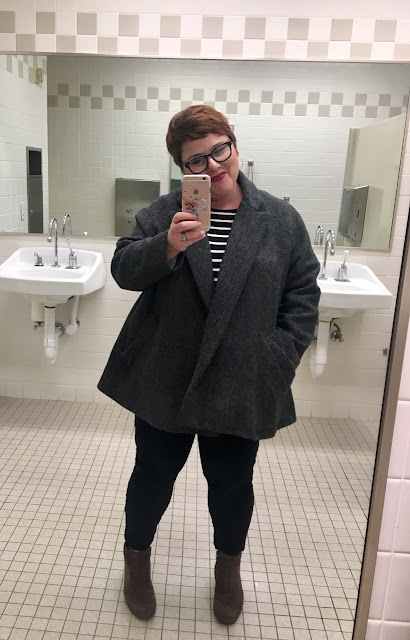 I haven't sewn on the snaps yet.
And here's a super awkward shot of the obligatory lining flash. Wearing my beloved bamboo striped Mandy boatneck underneath. 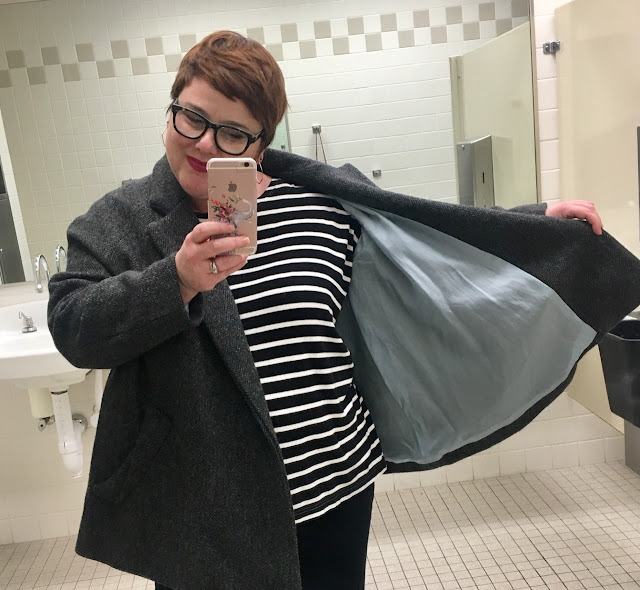 Final verdict. It's warm and comfy, and, honestly, I'm just happy it's done. The short distance between the bottom of the pocket and the hem does change the silhouette slightly, but it's better than being too long for me. It's a good lesson to pay attention more during the fitting process in the future. This wool is probably warmer than I need in California, but I hope to still get a lot of wear over the next few years. Also, I do occasionally visit colder lands.

So that's all I've got for now. Have an absolutely smashing holiday! Merry Christmas, Happy New Year,  Peace and Love! A very big cheers to all and many thanks for reading my humble blog.